Political Lions and Tigers and Bears……Oh My!! 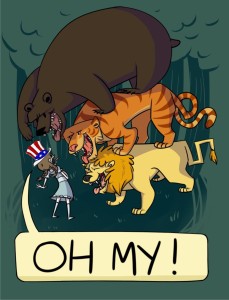 It Appears America’s Road to Recovery is still “Under Construction” or Obstruction, Plagued by the DC Potholes and Good Ol’ Florida Size Sink Holes at times Engulfing the Elected Officials, Media and Citizens the Like. The Only Forward Motion we can Hope for would be found on a Monday Night Football Game; as both Parties even Divided Amongst themselves Choose which side of the Sideline they want to Watch the Game from.

When we were All in Highschool weren’t we well Aware that the Consequences for an Infraction & Reprimand could end in a Punishment…..Yes, even a Suspension from School..…a Time to Reflect and Think about our Actions;  a Time to Evaluate the End Result of Our Behavior?

Of Course, I don’t Believe Government should be Shut Down…….Permanently. But, as Washington Plays this Dangerous Game of Crying Wolf, yet Again…..is it Time to Actually Take a Proverbial Timeout? With a few Representatives appearing more concerned about their Airtime than Forging a Solution…….A Permanent Solution – maybe a Few Sick Days ARE Needed to Cure the Symptoms. How many times can we keep putting the Band aid back on Our Responsibilities?                                   Send Them Home. Send Them Home  – without Pay!! Not the Hardworking Government Employee, or the Soldiers who put their Life on the Line for the Rest of Us Everyday…..but, the Bickering Members of Congress. Maybe they need to just go Home and Think about why they are There, the Purpose they Serve and the Impact that they Actually have on the Americans that helped put them there in the First Place.

To Paraphrase the Perspectives of a Few Good Men……….. Warren thinks its “Pretty Damn Dumb” not to reach an Agreement, while Cruz and Rubio will side to Oppose the Law “at All Costs”, as other Reps like Trey Radel head back to the Office and Dig in for a Workin’ Weekend in DC.

The Clock is Ticking as Tuesday approaches, the USA is Closed – Come Back Tomorrow sign may just be Ready to Hang in the Window……..this Time.