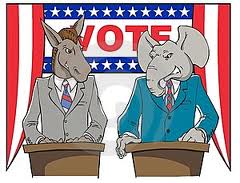 With Early Voting numbers and Polling Data starting to be released based on the
nearly 22 million votes already cast, the margins continue to tighten.

Swing states also continue to maintain their nickname status, as they keep us on the edge of
our seats with their early estimates. Providing a glimpse of what Excitement is yet to come on the Big Day Tuesday,
Party Pollsters feel confident their statistics hold the answer to the final outcome.

With such states as Florida, Colorado and Virginia posting a 1-2 % margin of difference,
there appears to be a little more breathing room in other hotly contested states such as Ohio and North Carolina
with a “comfortable” 2-3% margin.

Current Poll Estimates are running at:

After the heat that our state took for moving our Primary Elections up in the calendar, could it possibly come down to
FLORIDA, FLORIDA, FLORIDA
Proving what the Power and Strength of Swinging 29 Electoral Votes in one direction actually has?